Who has to be blamed for deadly trap of rural debts? 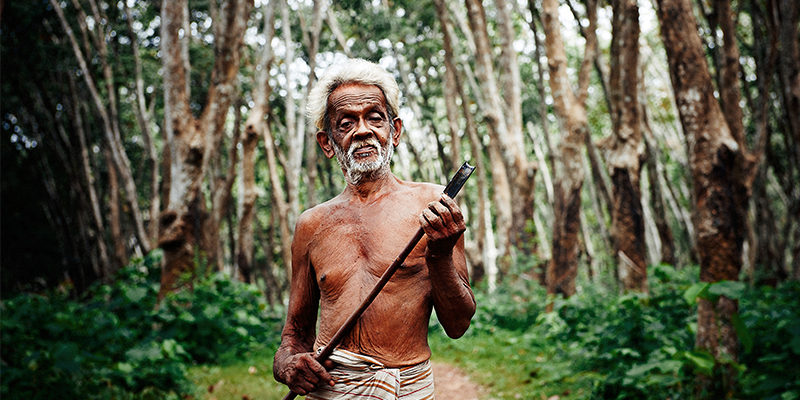 Nationalization of  14 large commercial banks of India in 1969 (and another 6  later in 1980) created enormous hopes in the minds of millions of general public; as same was expected to be the game changer for the socio-economic scenario of the country, especially of rural India. Then Government of India, further to the nationalization of banks, formalized the sketch of priority sectors for bank advances in 1972 to set dynamism to achieve the ambitious plans of all round development of agriculture and small scale industries in the country.  Today, Public sector banks have penetrated even in many remote areas across the country to cover five lakh villages of the country. They have been in the forefront in extending all types of banking services to rural masses engaged in farming activities as well as in allied activities such as dairy, fishery, piggery, poultry, bee-keeping, etc. The banks in rural areas have been actively lending to build agriculture infrastructure such as storage, soil conservation, watershed developments, as well food agro-processing units etc.  Besides agriculture lending, banks have been extending credits to Micro and Small Enterprises (45.38% of MSE are operating in rural areas.) of rural areas. Currently, 18 per cent of Adjusted Net Bank Credit (as of 31st March) of the previous year is flown out to agricultural and allied activities under priority sector advances. For small and marginal farmers, banks have to mandatorily extend eight percent of their overall loans. More importantly, the branches of public sector banks have been lending to farmers at reasonable interest rates without the burden of moneylenders’ dictates or the assistance of village leaders. Sadly, despite banks extending a variety of financial assistance to farmers, the pace of improvement in the rural economy is not fast enough even after 50 years of nationalization of banks.

Why does it happen?

Time and again, we read about debt-ridden farmers committing suicide. We do not have proper clue why farmers choose to set themselves and their standing crop ablaze. Why do rural masses are still in the clutches of most hated money lenders? Why does this sordid and unfortunate saga of suicides taking place, in spite of thousands of crores of crop loans waived and interest subvention were announced to farmers by the Governments to improve the livelihood of farmers? Is it because of indebtedness, crop failure, socio-economic factors or anything else? To answer all the above questions, we have to first understand the rural credit system.

The rural credit activities are shared by both formal and informal financiers. The lending activities of institutional lenders like commercial banks and co-operative societies are called the formal source of credit. The lending activities of unorganized lenders like the loan from Sahukars, individual money lenders, traders, friends, and relatives are called informal sources of credit. The most important reason for the continuation of informal credit in rural areas is that the financial institutions do not lend for non-productive consumption purposes like marriages, litigation, birth, and death, etc. Typically, it is possible to obtain the loan from the informal sources for such non­productive purposes. There are generally no intricate and complicated rules governing the granting of loans by the informal money lenders.  Informal sources of credit do not insist on punctual repayment as banks do. In many cases, there is no need to offer collateral security. Therefore, borrowers prefer the informal source of credits despite the fact that the interest charged by private moneylenders is exorbitantly high.

The study of suicide cases of the farmers reveals that the farmers who have borrowed money from private money lenders over a period of time unable to repay the loan and exorbitant interest charged on the loan amount. Unfortunately, such incidents of using borrowed money for non-productive purposes drag them into tight grip of moneylenders.  In the majority of cases, farmers across the country choose suicide to deal with money lenders trying to recover their dues. The other reasons are undue delay in payments by the factories/Mills to which the farmers have sold their produces or offer much lower price which even does not cover the production cost (ex: food grains, sugarcane, cotton etc.). The studies reveal that in most of the cases, non-repayment of borrowed money with interest or excessive delay in repayment leads to harassment from the private money lenders which force them to take the extreme step.

The challenges of banks in rural areas

The commercial banks and financial institutions in rural areas suffer from several challenges in their lending activities. Their credit portfolios are unabatedly swelling with NPAs due to internal and external causes. Let us discuss here, why farm loan granted by banks become bad.

Deterioration of assets due to internal reasons of the branches:

Are there any solutions for the above?

The real financial inclusion takes place only when the informal credit system in the rural area fully stops and the weaker section of the society is able to have access to the banks and other financial institutions of the area for their financial needs. Perhaps in our collective psyche, all of us wish formal credits should take charge of rural credit and release the helpless illiterate rural mass from the clutches of money lenders. Concurrently, it is absolutely necessary to upgrade the existing NPAs of financial institutions as well as a better approach for preventing or minimizing the incidence of new NPAs.

The above issues can be dealt by Government with necessary policy interventions. At present, the small and marginal farmers have limited access to bank finance. The earlier experience shows that banks continue to face a high level of delinquency in lending to agriculture sector especially to small and marginal farmers, oral lessees, tenant farmers, sharecroppers and landless labourers.  The general perception is that loans granted to this poor section of farmers are mostly not recoverable. This notion has gained strength in view of many Government schemes like DRI, IRDP, PMRY etc., failed for various reasons. Therefore, the need of the hour is to change the mindset of both the rural society and institutional financiers.

A number of researchers recommend the Government for the establishment of Agriculture Credit Risk Guarantee Scheme similar to CGTMSE for unsecured agricultural loans to reduce the stressed assets in the banking sector. No doubt, it is a much better option available compared to loan waiver scheme. However, experience shows that the similar scheme of DICGC for agricultural advances failed earlier due to the cumbersome process of claim settlements. Therefore it is essential that the perceived risks in lending small and marginal farmers, oral lessees, tenant farmers, sharecroppers and landless labourers without collateral shall be adequately addressed while establishing such new scheme. The Guarantee scheme if implemented shall act as a natural risk mitigant in the event of defaults and act as a natural hedge for the unsecured advances of financial institutions in rural areas. That would remove the apprehension of the banks about the default of loans granted by them. The Government may raise the corpus for this scheme through appropriate funding mechanism and necessary budgetary allocation.

Secondly, the union Government is stated to have a plan to introduce a nationwide farm insurance scheme. Many experts believe that the farm insurance plan is ‘doable and effective’ to at least recover the basic inputs in the event of uncertainty caused due to natural calamities.

The Government also needs to balance the regulation of physical commodities market and firming up of the linkages between the derivatives market and physical (cash) market primarily the agricultural commodities.  The Government should enact a strict law so that the Mill owners cannot escape from prompt payment for the commodities supplied by the farmers. The loanee who had made repayment in advance of the due date and if applied for a second loan shall be treated as a privileged borrower and disburse the loan to him as quickly as possible as an incentive for prompt repayment. Each bank shall have a policy of de-clogging of agriculture sector during distress periods through liberal compromise settlement schemes on an ongoing basis. The existing scheme of interest subvention may also continue for prompt repayments which will healthy credit culture amongst the rural folks.