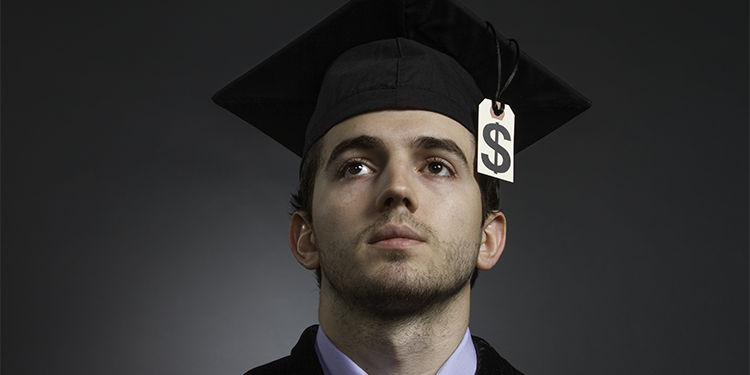 Students who belong to minority communities’ viz. Muslims, Christians, Sikhs, Buddhists, Jains, and Parsis are eligible for a 100% interest subsidy on education loans. This assistance is available to students who have secured admission to foreign Universities to pursue higher studies (i.e Post-Graduate Diploma, Masters, M.Phil, and Ph.D. level) and whose overall family income is not more than Rs.6.00 lakh per annum. Family income means gross parental income in the case of unmarried students and the gross income of the spouse in the case of married students. The Subsidy is available for the entire period of the moratorium (i.e course period plus one year or six months after getting job whichever earlier).

The meanings of the moratorium period, the amount of subsidy, minority communities, meritorious students are explained below.

Moratorium Period (Holiday period): The conditions of education loans sanctioned by banks specify that the loan shall be repaid by the borrower after completion of the course period plus holiday period/moratorium period. The repayment starts after a ‘moratorium period’ or ‘repayment holiday’, that is, one year after the completion of the course period or six months after getting a job, whichever is earlier. The above condition for education loans provided by the banks is uniform in all Public Sector Banks/ Scheduled Commercial Banks and Urban co-operative banks.

The amount of Subsidy: The students belonging to minority communities are eligible for subsidies, who have secured admission abroad for pursuing Post-Graduate Diploma, Masters, M.Phil and Ph.D. level, etc.The amount of subsidy is equivalent to 100% of interest charged to the loan account during the entire period of the moratorium. it is important to note that the Ministry of Minority Affairs (MoMA) would release subsidy component of the educational loan availed by minority students from the banks only for the loan amount up to   Rupees Twenty Lakh under the scheme.

Definition of meritorious students: There is no question of the “Meritorious” element in the Padho-Pardesh scheme. The student who secured admission abroad is considered as meritorious under the scheme.

Students who would like to avail of interest subsidy under the Padho-Pardesh scheme should inform their lending bank that he/she is eligible for that particular scheme. Students have to submit proof of belonging to the minority community to the lending bank to claim the interest subsidy. Then the lending bank will feed the students information into the Portal of Padho Pardesh launched by Canara Bank which is implementing agency of this scheme.  As per revised guidelines;

(i) Portal will be opened only once in a financial Year for fresh applications. In case, a sufficient number of applications have not received the portal may be opened again subject to the availability of sufficient funds under the scheme.
(ii) For renewal cases, the portal may be opened in every quarter or as decided by the Ministry.
(iii) The applications received for a claim of the interest subsidy will be examined and recommended for award of interest subsidy under the scheme by a Selection Committee.
(iv) 35% of seats will be earmarked for girl students. In case of non-availability of girl students, seats can be transferred to boys students. The periodicity of review will be decided by the Ministry.
(v) The decision of the Selection Committee in regard to awarding the interest subsidy will be final and no appeal could be filed against it.

Students have to submit periodical progress reports/documents to their respective lending banks from time to time during the period of pursuing their studies abroad. On completion, of course, students have to submit a copy of Mark list and certificate to the lending Bank as well as the Ministry of Minority Affairs for their records.

If the course pursued by the student of the minority community is partly in India and partly abroad, then he/she is eligible for the interest subsidy, in case the degree is awarded by the Foreign University.

2. Stream of concession loans available to minority communities in India

Loans to Stressed MSMEs: Is guarantee comes from GGTMSE instead of a sovereign guarantee?
May 19, 2020

Now you get ‘Electronic Cards’ for your Overdraft Accounts
April 24, 2020